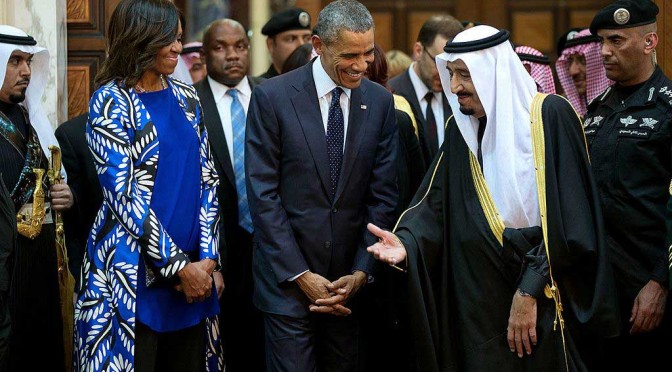 Without Western support, the Persian Gulf’s petro-monarchies would not be able to rule over their forcefully suppressed and disenfranchised populations.

The pivotal role played by the Wahhabi-Salafi ideology in radicalizing Muslims all over the world is an indisputable fact; this Wahhabi-Salafi creed has been generously sponsored by Saudi Arabia and the Gulf Arab States since the 1973 oil embargo, when the price of oil quadrupled and the contribution of the Arab petro-sheikhs towards the “spiritual well-being” of Muslims all over the world magnified proportionally.

However, the Arab autocrats are in turn propped up by the Western powers since the Cold War; thus syllogistically speaking, the root cause of Islamic radicalism has been the neocolonial powers’ manipulation of the socio-political life of the Arabs specifically, and the Muslims generally, in order to exploit their energy resources in the context of an energy-starved industrialized world. This is the principal theme of this essay which I shall discuss in detail in the following paragraphs.

Peaceful or not, Islam is only a religion just like any other cosmopolitan religion whether it’s Christianity, Buddhism or Hinduism. Instead of taking an essentialist approach, which lays emphasis on essences, we need to look at the evolution of social phenomena in its proper historical context. For instance: to assert that human beings are evil by nature is an essentialist approach; it overlooks the role played by nurture in grooming human beings. Human beings are only intelligent by nature, but they are neither good nor evil by nature; whatever they are, whether good or evil, is the outcome of their nurture or upbringing.

Similarly, to pronounce that Islam is a retrogressive or violent religion is an essentialist approach; it overlooks how Islam and the Quranic verses are interpreted by its followers depending on the subject’s socio-cultural context. For example: the Western expat Muslims who are brought up in the West and who have imbibed the Western values would interpret a Quranic verse in a liberal fashion; an urban middle class Muslim of the Muslim-majority countries would interpret the same verse rather conservatively; and a rural-tribal Muslim who has been indoctrinated by the radical clerics would find meanings in it which could be extreme. It is all about culture rather than religion or scriptures per se.

Islam is regarded as the fastest growing religion of the 20th and 21st centuries. There are two factors responsible for this atavistic phenomena of Islamic resurgence: firstly, unlike Christianity which is more idealistic, Islam is a more practical religion, it does not demand from its followers to give up worldly pleasures but only insists on regulating them; and secondly, Islam as a religion and ideology has the world’s richest financiers.

After the 1973 collective Arab oil embargo against the West, the price of oil quadrupled; the Arabs petro-sheikhs now have so much money that they are needlessly spending it on building skyscrapers, luxury hotels, theme parks and resort cities. This opulence in the oil-rich Gulf Arab States is the reason why we are witnessing an exponential growth of Islamic charities and madrassahs all over the world and especially in the Islamic World.

Although, it is generally assumed that the Arab sheikhs of the oil-rich Saudi Arabia, Qatar, Kuwait and some emirates of UAE sponsor the Wahhabi-Salafi sect of Islam, but the difference between numerous sects of Sunni Islam is more nominal than substantive. The charities and madrassahs belonging to all the Sunni denominations get generous funding from the Gulf States as well as the Gulf-based private donors.

All the recent wars and conflicts aside, the unholy alliance between the Americans and the Wahhabi-Salafis of the Persian Gulf’s petro-monarchies is much older. The British stirred up uprising in Arabia by instigating the Sharifs of Mecca to rebel against the Ottoman rule during the First World War. After the collapse of the Ottoman Empire, the British Empire backed King Abdul Aziz (Ibn-e-Saud) in his struggle against the Sharifs of Mecca; because the latter were demanding too much of a price for their loyalty: that is, the unification of the whole of Arabia under their suzerainty.

King Abdul Aziz defeated the Sharifs and united his dominions into the Kingdom of Saudi Arabia in 1932 with the support of the British. However, by then the tide of British Imperialism was subsiding and the Americans inherited the former possessions and the rights and liabilities of the British Empire.

At the end of the Second World War on 14 February 1945, President Franklin D. Roosevelt held a historic meeting with King Abdul Aziz at Great Bitter Lake in the Suez canal onboard USS Quincy, and laid the foundations of an enduring American-Saudi alliance which persists to this day; despite many ebbs and flows and some testing times, especially in the wake of the 9/11 tragedy when 15 out of 19 hijackers of the 9/11 plot turned out to be Saudi citizens. During the course of that momentous Great Bitter Lake meeting, among other things, it was decided to set up the United States Military Training Mission (USMTM) to Saudi Arabia to “train, advise and assist” the Saudi Arabian Armed Forces.

Apart from USMTM, the US-based Vinnell Corporation, which is a private military company based in the US and a subsidiary of the Northrop Grumman, used over a thousand Vietnam War veterans to train and equip the 125,000 strong Saudi Arabian National Guards (SANG) which does not comes under the authority of the Saudi Ministry of Defense and which plays the role of the Praetorian Guards of the House of Saud.

Moreover, the Critical Infrastructure Protection Force, whose strength is numbered in tens of thousands, is also being trained and equipped by the US to guard the critical Saudi oil infrastructure along its eastern Persian Gulf coast where 90% of Saudi oil reserves are located. Furthermore, the US has numerous air bases and missile defense systems currently operating in the Persian Gulf States and also a naval base in Bahrain where the Fifth Fleet of the US Navy is based.

The point that I am trying to make is that left to their own resources, the Persian Gulf’s petro-monarchies lack the manpower, the military technology and the moral authority to rule over not only the forcefully suppressed and disenfranchised Arab masses, but also the South Asian and African immigrants of the Gulf Arab states.

One-third of the Saudi Arabian population is comprised of immigrants; similarly, more than 75% of UAE’s population also consists of immigrants from Pakistan, Bangladesh, India and Sri Lanka; and all the other Gulf Arab States also have a similar proportion of immigrants from the developing countries; moreover, unlike the immigrants in the Western countries who hold the citizenship status, the Gulf’s immigrants have lived there for decades and sometimes for generations, and they are still regarded as unentitled foreigners.

Notwithstanding, it is generally believed that political Islam is the precursor to Islamic extremism and terrorism; however, there are two distinct and separate types of political Islam: the despotic political Islam of the Gulf variety and the democratic political Islam of the Turkish and the Muslim Brotherhood variety. The latter Islamist organization never had a chance to rule over Egypt, except for a brief year long stint; therefore, it would be unwise to draw any conclusions from such a brief period of time in history.

The Turkish variety of political Islam, the oft-quoted “Turkish model,” however, is worth emulating all over the Islamic World. I do understand that political Islam in all of its forms and manifestations is an anathema to the liberal sensibilities, but it is the ground reality of the Islamic world. The liberal dictatorships, no matter how benevolent, had never worked in the past, and they will meet the same fate in the future.

The mainspring of Islamic extremism and militancy isn’t the moderate and democratic political Islam, because why would people turn to violence when they can exercise their right to choose their rulers? The mainspring of Islamic militancy is the despotic and militant political Islam of the Gulf variety. The Western powers are fully aware of this fact, so why do they choose to support the same Arab autocrats that have nurtured extremism and terrorism when the ostensible and professed goal of the Western policymakers is to eliminate Islamic radicalism and militancy?

It’s because this has been a firm policy principle of the Western powers to promote “stability” in the Middle East rather than representative democracy. They are fully cognizant of the ground reality that the mainstream Muslim sentiment is firmly against any Western military presence and interference in the Middle East region. Additionally, the Western policymakers also prefer to deal with small groups of Middle Eastern strongmen rather than cultivating a complex and uncertain relationship on a popular level; certainly a myopic approach which is the hallmark of the so-called “pragmatic” politicians and statesmen.

Nauman Sadiq is an Islamabad-based attorney, columnist and geopolitical analyst focused on the politics of Af-Pak and MENA regions, neocolonialism and petroimperialism.