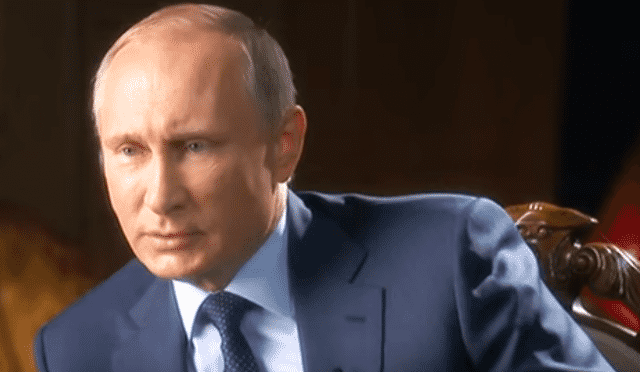 BILD: Mr President, by now the international community has virtually ostracized Russia. You are no longer allowed to participate in the G8 meetings of the leaders of the most important industrial nations. How much are you hurt by this measure?

Putin: In the past, I had the overall impression that Russia was never a full-fledged member of the G8 group. The foreign ministers, for example, were still meeting in the old format of the seven most important states, the G7, without Russia.

BILD: And what did you think when the president of the superpower USA, Barack Obama, mocked Russia as a „regional power“?

BILD: Does Russia not want to be a superpower?

Putin: No, we do not claim the role of a superpower for ourselves. That is far too expensive and unnecessary. We are still one of the leading economic nations in the world. As far as the concept of a “regional power” is concerned, I would recommend taking a look at a map of the world. In the West, our region is Europe. In the east, Japan and the USA with Alaska are our neighbors. In the north, we share a border with Canada over the Arctic Ocean. If you want to lower the significance of Russia in the world, you actually just want to elevate your own country. That is a mistake.

BILD: Will you try to bring back Russia into the G8 meetings?

Putin: In 2014, we invited everyone to have a G8 meeting in Russia. It was the others who did not come. Russia is always willing to participate in the G8 meetings again, but we have not bought any tickets for the journey yet.

BILD: How valuable are the G8 meetings for you? How much do you miss them?

Putin: Overall, the G8 meetings were quite useful, since it is always good to exchange alternative opinions and to listen to Russia. We are still carrying out this exchange with the G20 states, the APEC states from the Asia-Pacific region and with the emerging nations (BRICS).

BILD: What is the state of the relationship with NATO? The, back then, specifically created NATO-Russia Council is on hold.

Putin: We have also not frozen this cooperation. Russia would like to cooperate with NATO again. There are plenty of reasons and opportunities. But it is like in real life: a happy love needs to be reciprocated. If one does not want to cooperate with us, then fine, we will leave it.

BILD: It is not only the lack of cooperation that gives rise to concerns. Now there is also a direct confrontation with a NATO state. Turkey has recently shot down a Russian jet fighter in the Turkish-Syrian border region. Can such an incident – accidentally, so to say – set the whole world on fire?

Putin: Turkey is part of NATO, but it was not attacked. NATO therefore does not have to protect Turkey, and our problems with Turkey have nothing to do with the NATO membership of that country. The Turkish leadership had better apologize for shooting the plane down, which was clearly a war crime, instead of calling NATO’s headquarters. It’s strange, isn’t it? If Turkey is pursuing its own interests in the region, neither Germany nor NATO have to support the country, correct?

BILD: How big is the risk of such an incident escalating?

Putin: I very much hope that such events do not grow into large military conflicts. But if Russia’s interests and security are threatened, Russia will resist. Everyone needs to know that.

BILD: You mentioned the region, that is, the Near and Middle East. Under your leadership, Russia has also intervened in Syria by military means. Many Western experts and politicians are saying that the Russian air strikes are not aimed at the Islamist terror militia ISIS, but at the rebels fighting against the Syrian ruler Assad. In short: does Russia bomb the wrong people?

(The interpreter translates Putin’s Russian reply into German with the words: „You are saying everything the wrong way.“ Putin laughs and intervenes by saying in German himself: „That’s all lies, I have said.” Then he continues in Russian and is immediately serious again.)

Putin: The alleged video evidence for this claim was developed before Russian forces even began their mission. We can prove that, even though our critics refuse to believe it. And, by the way, what about the US pilots who bombed a hospital of “Doctors without Borders” in Kunduz, Afghanistan? Many people died there, but the Western press is not saying anything about it.

BILD: No, there was extensive coverage in many newspapers and magazines.

Putin: Well, maybe it was mentioned a few times in the press, but only because foreigners were among the victims. Then the incident was quickly forgotten again. And who still remembers the weddings in Afghanistan, where hundreds of innocent civilians were killed by an American bombardment? Our pilots do not bomb civil targets, except if you call the thousands of tanker trucks – virtually a living pipeline – a civil target. Those we bomb, yes, but so do the Americans and the French.

BILD: The Syrian President Assad bombs his own population and is responsible for many thousands of deaths. That is a fact. Is Assad your ally? If so, why?

Putin: That is a tricky question. I also think that President Assad has done much wrong over the course of this conflict. But the conflict would never have become so big if it had not been fueled by outside of Syria – with weapons, money, and fighters. Who is responsible for that? The Assad government, which is trying to hold the country together? Or the rebels who want to tear it apart and fight against this government?

BILD: What is Russia’s aim in the Syria conflict?

Putin: I can tell you what we do not want: we do not want Syria to end like Iraq or Libya. Look at Egypt: one has to praise President Sisi for taking over the responsibility and power in an emergency situation, in order to stabilize the country. Therefore one should try anything to support the legitimate rulers in Syria. But this does not mean that everything can just stay the same. Once the stabilization of the country has progressed, a constitutional reform has to follow, and then early presidential elections. Only the Syrian people can decide who should govern the country in the future.BILD: Do you seriously think that Assad is still the legitimate ruler in Syria? He is bombing his own people.

Putin: Assad does not fight against his own population, but against those who take armed action against the government. If the civil population is then also harmed, it is not Assad’s fault, but primarily the fault of the insurgents and their foreign supporters. Once again: this is not supposed to mean that everything is fine in Syria or that Assad is doing everything right.

BILD: If there actually were presidential elections, and Assad loses, would Russia grant him asylum?

Putin: It is too early for that. But it was surely more difficult to grant Mr Snowden asylum in Russia than it would be in the case of Assad. But first the Syrian population has to be able to vote, and then we will see if Assad would have to leave his country if he loses the election. In any case, this is not a prerequisite. Until then, Russia will fight ISIS and those anti-Assad rebels who cooperate with ISIS. At the same time, we will support Assad’s forces fighting against ISIS – but also anti-Assad forces that are fighting against ISIS. That is, admittedly, quite complicated.

BILD: To what degree does the emergence of the conflict between Iran and Saudi Arabia further complicate the Syria conflict?

Putin: This conflict indeed makes everything much more complicated: solving the Syria question, fighting together against terrorism, ending the refugee crisis. I do not want to speculate whether a full-blown conflict between these two states is to be expected. Russia maintains very good relations with both – Iran as well as Saudi Arabia. But it was a mistake of the leaders in Saudi Arabia to execute the Shiite cleric. He was not fighting with arms in his hands. In Russia, capital punishment was not even carried out in the worst times of terrorism, in the 90s and 2000s. On the other hand, it was also absolutely inappropriate to storm the Saudi Arabian embassy in Tehran.

BILD: Mr President, one last question: when Russia hosted the Winter Games in 2014, there was a lot of criticism beforehand concerning the state of the local democracy. Do you think there will be a similar debate prior to the FIFA World Cup 2018?

(After translating for almost two hours without a break, the interpreter is quite exhausted. Listening to him, it seems as if his translation of the question is rather cumbersome. This leads to a brief banter about the two languages, German and Russian.)

Putin: The German language is more precise. But Russian is more versatile, colorful. Of course, this richness can also be found in the great German writers.

Putin: Concerning democracy in Russia, I think: the powers like to talk about “freedom” in order to wash the population’s brains. Democracy means the power of the people and the possibility of influencing the governing parties. Russia had had enough experience with a one-party-system – we will not go back there. We will further develop and perfect our democracy. 77 parties are, by now, approved for parliamentary elections. Most governors are elected directly.

BILD: But the political conditions in Russia seem to differ from a European democracy.

Putin: There is no uniform, global model for democracy. What you mean by democracy differs from county to country. This conception is different in India and in the USA and in Russia or Europe. In the USA, for example, twice in history a politician became President because he had more electoral votes, regardless of the fact that his competitor had more votes from the citizens. Does that mean the USA are not a democracy? Of course they are. And concerning the attempts to abuse sports or the World Cup in Russia for dirty political games: this is really stupid and wrong. Even if states sometimes have problems with each other, arts and sports should not suffer from that. Arts and sports are there to bring the people together – and not to divide them.

BILD: Mr President, thank you very much for this conversation.