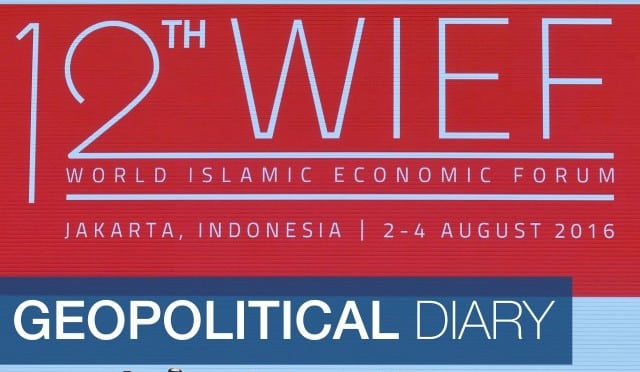 This year’s World Islamic Economic Forum, held in Jakarta, underscored Indonesia and Malaysia’s contributions to the global Islamic economy, much as past forums held outside Southeast Asia have. (ADEK BERRY/AFP/Getty Images)

The annual World Islamic Economic Forum is always intended to be a global discussion. Nonetheless, this year’s forum, which ended on Thursday in Jakarta, highlighted one region in particular as a heavyweight in the global Islamic economy: Southeast Asia. That 63 percent of the forum’s 4,200 participants from 73 countries were Indonesian, and 24 percent Malaysian, was not just a function of geographic proximity and ease of travel. Even when it is hosted elsewhere, the forum reinforces the countries’ dominance in the burgeoning world of Islamic finance.

The global Islamic economy is an amorphous concept comprising all manner of trade and financial services permitted by Islamic law, such as sukuk, Islamic bonds that avoid interest. In a sense, the Islamic economy consists of any transaction in which money is exchanged in accordance with Sharia principles, and the rules are never quite set in stone. According to simple directives laid out in Islamic verses and discussed over the centuries, Islamic economic law is constantly evolving. In addition, the varying interpretations of Islamic law have produced differing ideas of what constitutes Islamic fashion, food, travel, goods and finance from country to country. The Islamic economy is rife with competition to establish an accepted standard, for instance with a globally accepted halal certification label.

As interest in the sector grows among Muslim countries and their populations, the global Islamic economy is proving to be quite lucrative. In particular, Islamic finance is gaining traction worldwide, offering financial products and services comparable to those available in conventional markets but tailored to Islamic tenets. Rather than integrating with the global financial system, Islamic finance complements it, providing an extra tranche of financial services activity that appeals to Muslims. Estimated at $2 trillion — just 1 to 2 percent of the global financial system — Islamic finance is also much smaller than its conventional counterpart. But it is growing quickly.

Malaysia is the sector’s undisputed leader. The country has crafted a dual banking system in which its conventional financial sector runs alongside an Islamic one, and it is responsible for 52 percent of the global Islamic bonds that are outstanding today. Malaysia is also the only country with a healthy domestic Islamic bond market denominated in a local currency. Beyond bonds, roughly 75 percent of the securities listed on Bursa Malaysia, Kuala Lumpur’s stock exchange, are Sharia-compliant.

Several factors have contributed to the country’s success in Islamic finance, but none more so than the support of its government. In the 1980s, then-Prime Minister Mahathir Mohamad oversaw the formalization of the sector, which he envisioned as a way to bring ethnic Malays into the formal economy then dominated by ethnic Chinese. In the years since, Kuala Lumpur has established a strong, centralized regulatory structure under its central bank, setting it apart from countries trying to catch up to Malaysia, including those in the Gulf Cooperation Council (GCC), which have less centralized banking systems. This has enabled Malaysia’s Islamic finance sector to stay innovative and to defy other countries’ attempts to surpass it, even as lower oil prices and an overall economic slowdown in Asia have hampered it in the past few years.

Then there is Indonesia, the world’s most populous Muslim country, the Islamic world’s largest economy, and the host of this year’s World Islamic Economic Forum. Indonesia is a burgeoning force in the world of Islamic finance. At the forum, the country unveiled plans — including a banking agreement with Malaysia and a memorandum of understanding with Bursa Malaysia to jointly develop their Islamic capital markets — to further cultivate its Islamic financial sector. Though Jakarta hopes to develop its own Islamic finance industry, it is no surprise that it is taking cues from Malaysia. At the same time, Malaysia is eager to expand its presence in Indonesia, given Jakarta’s potential.

Outside Southeast Asia, Islamic finance has taken off in the GCC, as well as in conventional finance capitals such as London, Singapore and Hong Kong, where more and more banks offer Islamic financial products. As part of its effort to increase its share of the global Islamic economy, the GCC began holding its own global summit several years ago. Still, the numbers don’t lie. Southeast Asia is well ahead when it comes to Islamic finance, a truth that this year’s World Islamic Economic Forum only reaffirmed.