The United States and European countries that have provided aid to Ukraine had long pressed for his dismissal; in his year in office,

Mr. Shokin became a symbol of Ukraine’s deeply ingrained culture of corruption, failing to prosecute a single member of the deposed Yanukovych regime or of the current government while blocking the efforts of reform-minded deputies.

Alas, nothing is likely to change unless President Petro Poroshenko and Parliament agree to install some real corruption fighters and approve serious judicial reform.

Corruption has been pervasive in Ukraine since independence, fed by close-knit ties between politicians and oligarchs and a weak justice system. The protests in 2014 that led to the removal of President Viktor Yanukovych were largely fueled by popular fury at his monumental corruption and abuse of power. Yet his overthrow has yet to show results.

In a speech in Odessa last September, the United States ambassador, Geoffrey Pyatt, said corruption was as dangerous for Ukraine as was the Russian support for a military insurgency in eastern Ukraine. And on a visit last December,

Vice President Joseph Biden Jr. said corruption was eating Ukraine “like a cancer.” Among the examples Mr. Pyatt cited was the seizure in Britain of $23 million in illicit assets from the former Ukrainian ecology minister, Mykola Zlochevsky;

Mr. Shokin’s office, however, declared that there was no case against the minister, and the money was released.

In his last hours in office, Mr. Shokin dismissed the deputy prosecutor general, David Sakvarelidze, a former prosecutor in Georgia brought in by President Poroshenko to fight corruption. And before that, Mr. Shokin had systematically cleansed his office of reform-minded prosecutors.

The acting prosecutor general now is Yuriy Sevruk, a crony who can be trusted to continue Mr. Shokin’s practices.

Mr. Poroshenko, himself a product of the old system, has had his hands full with the Moscow-backed separatists in the east and unceasing political turmoil in Kiev, where Prime Minister Arseniy Yatsenyuk’s government is hanging by a thread.

In these circumstances, Mr. Poroshenko seems to have accepted continuing corruption as the price to pay for a modicum of maneuvering room. But the president, the prime minister and the Parliament must be made to understand that the International Monetary Fund and donor nations, including the United States, cannot continue to shovel money into a corrupt swamp unless the government starts shaping the democratic rule that Ukrainians demanded in their protests.

Mr. Poroshenko cannot simply allow one of Mr. Shokin’s cronies to slide into the ousted official’s tainted seat. He should immediately reinstate Mr. Sakvarelidze and begin a broad public discussion on the choice for the next prosecutor general, making clear that his mandate will be a thorough reform, and that the government will be fully behind it. 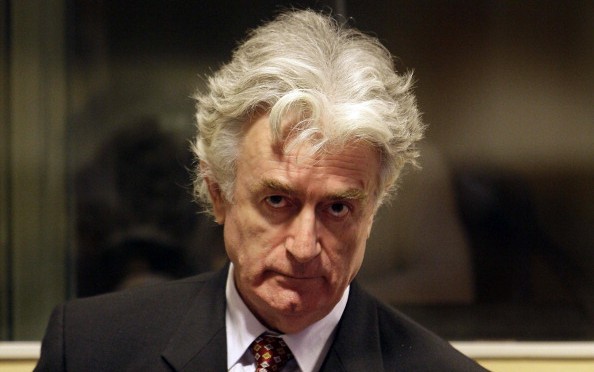 When about 8,000 Bosnian Muslim men and boys were rounded up in Srebrenica in 1995, one man had the power to spare their lives. He didn’t. Instead, he unleashed what the United Nations called the worst crime on European soil since the Holocaust.

That man, Radovan Karadzic, has now been convicted of genocide and nine counts of war crimes by the International Criminal Tribunal for the Former Yugoslavia in The Hague. With his mop of gray hair and neat suit, the 70-year-old Karadzic may not have the bearing of a mass killer. But testimony that lasted nearly 500 days left no doubt about his culpability for engineering the plan to wipe out the entire male Muslim population of Srebrenica.

The verdict provides a kind of justice for the victims of Karadzic’s campaigns and their families. As chief prosecutor Serge Brammertz noted, „Moments like this should also remind us that in innumerable conflicts around the world today, millions of victims are now waiting for their own justice. This judgment shows that it is possible to deliver it.“

It’s a hopeful thought; to this point, too few war criminals have been brought to justice. And yet it’s impossible not to feel that it all comes a little late. The size and scope of Karadzic’s actions render them immune to punishment. There’s no question that throwing an old man in prison lacks a certain moral force.

Which leads to the deeper service of the verdict: It establishes an authoritative historical record.

All too often, in the absence of such a record, false narratives are created and disseminated. From South Africa’s Truth and Reconciliation Commission to the Khmer Rouge tribunal in Cambodia, justice has not been the only – or even the principle – purpose of the exercise. An ironclad narrative was the aim.

In the Balkans, where nationalist mythologies are still easily stirred, history and fiction have too often been intermingled. In the course of Karadzic’s trial, the recorded testimony of nearly 600 witnesses was carefully documented, leaving future generations with a map for dispelling mythologies. It is the indelibility of this record – and the model it leaves for other wounded communities hoping to set their records straight and heal – that merits acknowledgment, as much as a life sentence for a criminal in an already distant war.

Note of Ed. of Philosophyclub.bg

Ethnic cleansing was at the heart of the Bosnian war right from the earliest days: “The Balkans produce more history than they can consume.” – Winston Churchill