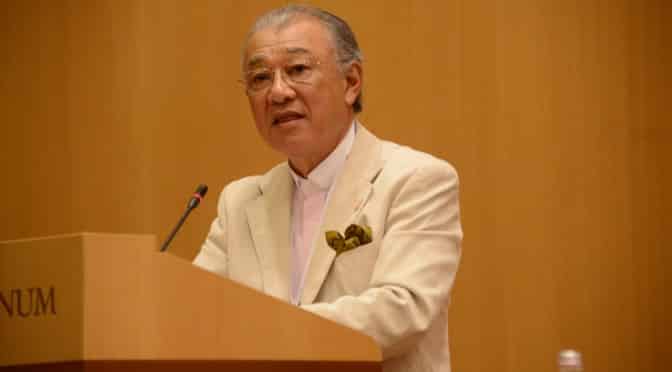 It is indeed a great honor to be here today in such distinguished company.

I am truly grateful to the Pontifical Council for Health Care Workers for graciously co-organizing this symposium; and I would like to thank the Good Samaritan Foundation, the Fondation Raoul Follereau, and the Sovereign Order of Malta for your cooperation.

I believe that we cannot talk about leprosy without listening to those who have experienced it. But there have been not many who have heard their voices directly. Today, I would like to express my special appreciation to those who have come from so far to share their experience with us.

Let me begin by acknowledging the role that the Roman Catholic Church has played in caring for those who suffer from leprosy.

Many in the Church have devoted their lives to helping leprosy patients.

Among them were Saint Damien whose care for leprosy patients in Hawaii in the 19th century was highly recognized, or Mother Teresa, a Nobel Peace Prize laureate for her dedicated services to the poorest of the poor and for people with leprosy, and other diseases.

I myself have been fortunate to meet Mother Teresa, in India. When I visited a home for leprosy patients run by the nuns of the Missionaries of Chastity, she showed me around herself. My visit and experience of joining her in prayer for the patients, is a memory that I shall never forget.

Wherever I travel, many who have been cured of leprosy have told me how grateful they were for the devoted care of the Church.

The Nippon Foundation of which I am chairman, and its affiliated organization, the Sasakawa Memorial Health Foundation, have been committed to eliminating leprosy since the 1960s, in addition to diverse humanitarian programs we undertake in many parts of the world.

In 1983, my late father, Ryoichi Sasakawa, was invited to meet and talk with His Holiness Pope John Paul II in his office, and I accompanied him then. During the audience, His Holiness wrapped his arms around my father and expressed deep gratitude for his work to eliminate leprosy and encouraged him to continue.

In the 1990s, we at The Nippon Foundation decided to make available the effective treatment for leprosy developed in the 1980s, the Multidrug therapy, free of charge globally. With the cooperation of WHO and many others, we were able to achieve a dramatic decline in the number of patients.

I was granted a second audience with His Holiness Pope John Paul II in 2003.  At that time I was delighted to be able to report that I traveled and confirmed that the medicine was always in stock even in the remotest districts of all the endemic countries myself, and as a result of successful distribution of the medicine, the number of patients had shown a significant decline.

Thanks to the medicine, the number of leprosy patients declined. Yet, while there was an improvement on the medical side, the social problem of discrimination remained unchanged. Many continued to suffer from the discrimination and stigma associated with leprosy.

In other words, although they were cured of leprosy, they still continued to be stigmatized as former “leprosy patients.” They were discriminated against, unable to return home or go back to work. They had no other choice but to live in the leprosaria or leprosy colonies where they had lived as patients.

The problem of public awareness stems from the deep rooted misperceptions of leprosy that lead to discrimination. In many cases, leprosy is still misunderstood as a hereditary disease or a curse or punishment from God.

To rectify these misperceptions, The Nippon Foundation carries out activities that promote correct understanding of leprosy. For example, every year since 2006, we continue to launch a message that we call the “Global Appeal to End Stigma and Discrimination against People Affected by Leprosy” to coincide with World Leprosy Day in January.  This is one of our key advocacy efforts. The annual appeal is made in collaboration with leaders representing different sectors of society such as medicine, business, academia, to name a few, to try to reach out to a broader public.

I would like to recognize, and once again express thanks for the support that we had received from the Pontifical Council for Health Care Workers at the time of Global Appeal 2009. We sent out a message, together with the world’s religious leaders, “to eliminate discrimination against leprosy and let the healing begin”.

These activities seek to correct misunderstanding and encourage the public to learn more about the disease. I believe this is one of the steps toward realizing a world without discrimination and stigma associated with leprosy.

There is another awareness that must be addressed. This is the self-awareness of people themselves who have been affected by leprosy.

I realized that many of them also had misperceptions of the disease. They had lived with discrimination too long that they had even given up all hope of returning to society.

They chose to live isolated from society because they feared further discrimination, never realizing that they too have their rights as human beings.

Religious leaders touch the hearts and minds of so many people. Your words teach us compassion, give us courage, heal suffering, and bring us together.

Last year, His Holiness Pope Francis graciously received a delegation of people affected by leprosy from Brazil at the Vatican, and they have told me how meaningful and rewarding it was for them.

Today, this symposium is attended by representatives from the Roman Catholic Church as well as from other faiths that the Holy See has cordially welcomed.

We have come together to discuss holistic care and share the need to eliminate the social discrimination against leprosy.

The ladies and gentlemen who have experienced what it is to be afflicted by leprosy are also here with us today.  They are the courageous people who have stood up to bring to the attention of the entire world the situation that all people affected by leprosy are now going through. They are the dynamic leaders who are actively guiding others to follow.

By joining forces, we can better ease the suffering of those affected by leprosy. By working together, we can enable them to recover their dignity.

In closing, let me share the words of a friend who was cured of leprosy. He was afflicted by leprosy when he was a young boy. Since then, he has lived in a leprosarium for over 7 decades. Now he is 89 years old and active in sharing his stories and experiences.

He often tells me:

“Although I have suffered discrimination, I choose to forgive those who have discriminated against me, and in doing so, my life is enriched.”

Hearing his words, I was struck by the strength and tolerance that human beings are capable of. He is one of many who have courageously stood up to speak out against discrimination and change these conditions.

The voices of those affected by leprosy resonate powerfully for they have experienced discrimination first-hand and suffered its pain. By listening closely to their voices, we can learn what should be done.

Finally, I would like to propose that this symposium sends a clear message to the world—that leprosy is curable, treatment is free and there is no place for discrimination. In particular, I call for an end to the use of the hurtful term “leper” and urge that leprosy not be used a negative metaphor for human failings.

Mr. Yohei Sasakawa has been conferred the honorary degree of Doctor honoris causa of the  Sofia State univerity  „Kliment Ohridski“ , short before this remarcable message to the world,  for his distinguished conrribution to human sciences and long year sponsorship of Nippon Foundation for young and gifted Bulgarian scholars.