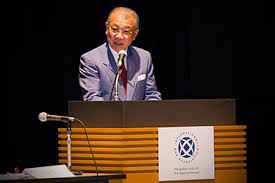 The problem of discrimination is deep-rooted. A person who is infected by leprosy is excluded from society, WHO’s Goodwill Ambassador says.

bdnews24.com Senior Correspondent Dhaka, Apr 13 (bdnews24.com) –
It brought a zest for life when Yohei Sasakawa touched Mohammad Arif’s back of the hand where doctors diagnosed leprosy four months back.The 18-year-old cell phone mechanic could walk freely in the public as he was diagnosed very early; thus the mark was not so vivid. But he is enduring a feeling of rejection as the word leprosy still means ‘curse of God’ to many.
„You will be completely cured, if you take medicines regularly. It’s like when you get flu, you need to take medicines,“ Sasakawa tried to inspire the young patient on Friday at the outdoor of a leprosy clinic in the capital where Arif comes to get free drugs.

„I need people to work in collaboration so that every single patient can live in this country like others,“ Sasakawa, the World Health Organisation’s Goodwill Ambassador for Leprosy Elimination, told bdnews24.com as he observed many cases of leprosy, despite the progress Bangladesh has made in containing the disease.

The age-old debilitating disease was officially eliminated in 1998 as the prevalence rate was below 1 per 10,000 people, but still nearly 5,000 people are being diagnosed with leprosy every year in Bangladesh.

Many of them have to cry in silence in fear of rejection and discrimination due to social stigma.

„It’s (leprosy elimination) like two wheels of a motorcycle,“ Sasakawa said, „the front wheel is medical treatment and the back wheel is social solution. Both wheels should be equal in size and speed.“

„The disease is fully curable now. But I have visited thousands of cured people. They have passion to work, but they don’t have opportunity. They don’t get vocational training. It’s because they face discrimination.“

The chairman of the Japan’s largest charity The Nippon Foundation, Sasakawa has been involved with anti-leprosy campaign since 1965, when he accompanied his father, Ryoichi Sasakawa, to South Korea to visit leprosy sanatorium.

He joined the foundation as a trustee in 1981 and served as president from 1989 until July 2005 when he became the chairman.

In 1980s when WHO proved multi-drug therapy can cure leprosy, Sasakawa funded WHO to ensure free drugs to every patient across the globe.

As Sasakawa described the elimination of leprosy as his life’s work, he spends a third of every year travelling around the world as WHO Goodwill ambassador, a position he assumed in 2001.

He is also campaigning to end discrimination and other human rights violations faced by tens of millions of leprosy-affected people around the world.

„The problem of discrimination is deep-rooted. A person who is infected by leprosy is excluded from society and it continues even after that person is cured,“ Sasakawa said, urging the media to convey ‘correct’ information to help eliminate the discrimination.

He termed it ‘unfortunate’ that non-scientific concept still haunts rural people. „The disease is not that much infectious like others (communicable diseases).“

According to doctors, the first visible sign of leprosy is a patch on the skin, sometimes with loss of feeling around that area.

It is now believed that 99 percent people are naturally immune to the leprosy bacteria and once a patient begins treatment they are no longer infectious.

Patients might face deformities particularly in hands and feet if there is delay in treatment or if they are left untreated.

„We should ensure early detection and early treatment, only then can we cure the deformity,“ Sasakawa said as he counted the days until every country in the world achieved the elimination of leprosy as a public health problem.

Because of his repeated approach, the United Nations has adopted a unanimous resolution in June 2008 to urge governments to end basic human rights violations of people affected by leprosy.

Also Japan’s ambassador for the human rights of people affected by leprosy, Sasakawa arrived in Dhaka on Apr 11 on a five-day visit to see leprosy control activities on the ground.